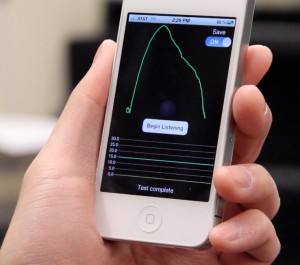 Is there anything a smartphone app can’t do? Researchers at the University of Washington, UW Medicine and Seattle Children’s hospital have figured out how to let people measure their own lung health by breathing in the direction of the standard microphone on a smartphone, without any specialized attachments.

Here’s the cool part: The results from the app are within 5 percent of those from commercial spirometers that run into the thousands of dollars. That level of accuracy means the app is already meeting medical standards.

The app, called SpiroSmart, analyzes the sound waves from a strong exhale to judge the health of the person’s lungs. The results from testing on an iPhone 4S were presented earlier this month at the Association for Computing Machinery’s International Conference on Ubiquitous Computing.

“There’s a big need in the pulmonary community to make testing cheaper and more convenient,” said lead researcher Shwetak Patel, a UW assistant professor in the Computer Science & Engineering and Electrical Engineering departments, in a UW news article on the research. “Other people have been working on attachments for the mobile phone that you can blow into. We said,’‘Let’s just try to figure out how to do it with the microphone that’s already there.’ ”

Next up: The team will use a Coulter Foundation grant to fund more clinical testing, as a prelude to seeking Food & Drug Administration approval.

Here’s a video showing the app in action.