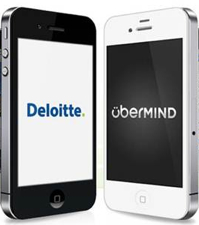 Financial services and consulting giant Deloitte this morning announced its acquisition of Ubermind, the Seattle-based mobile app company, aiming to make itself a bigger player in the booming mobile economy.

The acquisition was first reported last week by GeekWire. The companies had previously declined to comment. Prior to the announcement, we heard rumblings that the purchase price was in the approximate range of $40 million to $50 million.

In its news release today, Deloitte described the financial terms as undisclosed.

Ubermind, based in Seattle’s Fremont neighborhood, employs about 200 people. It makes mobile apps for companies such as Target, AllRecipes, Alaska Airlines, Amtrak and others. Ubermind’s home page announces the news with the headline, “Left Brain Meets Right.”

Its logo now has the addendum, “fueled by Deloitte.”

“Today is a pretty epic day for us,” says Ubermind in a blog post this morning. “Today, we’re joining forces with Deloitte.”

Joining Deloitte gives us a chance to be part of something big—something bigger than we could ever accomplish on our own. By combining our creative and technical chops with Deloitte’s global reach, industry insight, and deep talent, we have the ability to make an unmistakable impact in the industry.

We are also focused  on maintaining what was working. The key elements of our business that make us unique will remain the same: our people and culture. We look forward to continued success as part of Deloitte Consulting LLP.

As part of the acquisition by Deloitte, Ubermind CEO Shehryar Khan and founder Donald Brady will join Deloitte Consulting LLP as principals, according to the Deloitte news release.

“The acquisition combines the creative and technical strengths of both organizations to bring depth and scale to digital strategy, design, engineering and integration for the marketplace,” says Janet Foutty, Deloitte Consulting national managing director for technology, in the news release.