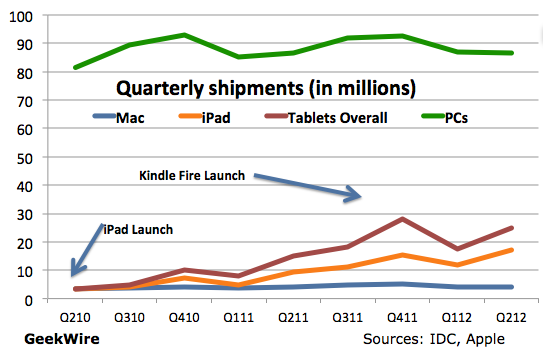 Most of the major technology research firms say no. As reflected in the chart above, they count PCs and tablets separately when reporting their data. “Media tablets” such as the iPad and Kindle Fire are separate from traditional desktop and notebook computers. 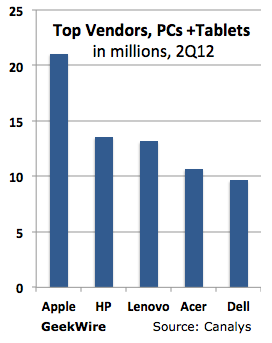 But increasingly it’s becoming harder to argue that these are separate markets. People who otherwise might have purchased low-end Windows notebooks or netbooks or ultrabooks (or whatever the latest name is) are opting in many cases for iPads instead. Sales of tablets, led by the iPad, have been growing, in contrast with flat Windows PC and Mac unit sales.

What would the tablet and PC market look like if it were considered one? Research firm Canalys looks at the market that way, and its numbers at right show Apple reclaiming the No. 1 spot in worldwide PC shipments (including iPads) in the second quarter. (Apple last held the position in the fourth quarter of 2011, thanks to strong holiday sales of the iPad.)

“In contrast to pads, Windows PC shipments continued to disappoint,” Canalys wrote in a wrapup of its latest findings this week. “Ultrabooks have not hit the price points that could excite large numbers of buyers and the share of the overall market taken by Windows fell to a new low of 73%. Intel’s share also hit an all-time low, falling below 70%.”

This is why so much is riding on Windows 8. Microsoft finished the new operating system this week, sending it to computer makers for installation on all sorts of machines, including tablets, in time for the holiday shopping season. The interface is meant to scale across desktop computers, notebooks and tablets, as Microsoft tries to keep its operating system at the center of computing.

Will it work? Will Windows 8 accomplish that mission? The answer to that question depends on the patience of longtime Windows users as they deal with the learning curve that comes with Windows 8’s new tablet friendly, tile-based interface, which is intended to work across tablets and traditional computers. Learning all those new commands takes some time, as we’ve documented in the past.

Microsoft is taking a gamble by trying to make one Windows interface accommodate all types of devices. But looking at these trends across the broadly defined “personal computer” market, the reasons for the company’s choice become more clear.

Bottom line, it should be fascinating to see what these charts look like in another year.