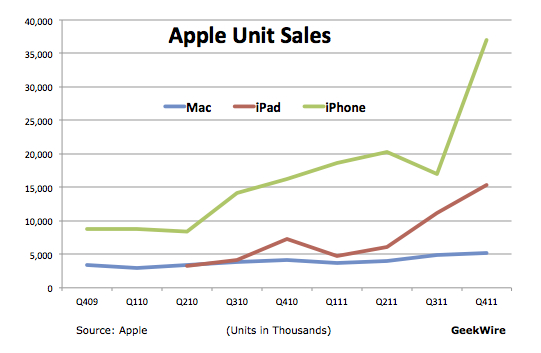 Apple just reported some gigantic quarterly financial results, with revenue of more than $46 billion, and earnings per share of $13.87. Analysts were expecting $38.85 billion in revenue and $10.08 in EPS.

Driving the results were sales of the iPhone, which hit 37.04 million units, an increase of 128 percent over the same quarter last year. The company sold 15.43 million iPads, up 111 percent, and 5.2 million Macs, up 26 percent.

The booming sales of the iPhone reflect the release of the iPhone 4S, and pent-up demand as consumers held back on purchases prior to its debut. The company disappointed Wall Street in its previous earnings report with iPhone sales that fell below analysts’ expectations, as a result of that phenomenon.

In the recent quarter, the sharp increase in unit sales of the iPad was also notable, given the increased competition that Apple’s tablet faced during the holiday season from Amazon’s $199 Kindle Fire. Amazon reports its earnings next week.