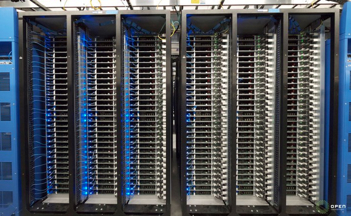 Construction has begun on Apple’s 338,000-square-foot, $68 million data-center building in Prineville, Ore. — the first of two giant structures planned for the property.

The Oregonian reports that Apple has cleared and flattened land for the building, which will be twice the size of a Costco warehouse. Apple’s facility sits right across from Facebook’s equally-large data center.

After securing 160 acres of land for $5.6 million in February, Apple quickly built a 10,000 square-foot modular data center on the site. There are plans to build two data center buildings and possibly more structures.

Not surprisingly, Apple has been mum on the details, but intrepid Oregonian tech reporter Mike Rogoway spotted a security guard on the site wearing a jacket with an Apple logo.

Data centers don’t employ many workers, but they have sprung up in the Northwest with great frequency in recent years in part due to the cheap hydroelectric power from Columbia River and — in the case of Prineville — the cool night air. Some have raised concern about using up excessive amounts of energy. This GreenPeace report from last April looks at how the big tech companies stack up with the environmental-friendliness of their data centers.

In addition to Apple and Facebook, Google and Amazon.com have large data centers in Oregon, while companies such as Microsoft, Yahoo and Intuit have put operations near Quincy, Washington.