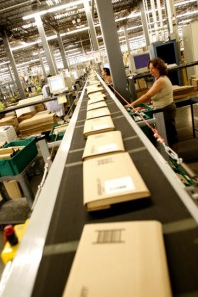 Amazon.com is expanding aggressively overseas, and the latest example comes via Reuters which reports that the giant Seattle online retailer is planning to establish its first fulfillment center in Mumbai, India. That’s a significant move, signaling that Amazon.com is looking to bring its brand of e-commerce to the planet’s second most populous country.

Amazon.com grew its international sales by 44 percent during the third quarter to $4.94 billion, driven in part by the launch of the Spanish language site Amazon.es and a French Kindle store. Could an Indian version of the site be next?

In addition to the expansion in India, Amazon continues to open new warehouse facilities in the U.S. Today, the company announced that it will spend $50 million to open a new one million square foot fulfillment center in Spartanburg County, South Carolina.

“South Carolina has been a great home for us and we’re excited to create hundreds of additional jobs in the state,” said Dave Clark, vice president, Amazon Global Customer Fulfillment.

According to Reuters, Amazon established more than 10 new fulfillment centers in the U.S. last year.