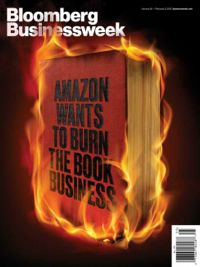 Bloomberg Businessweek’s cover story this week drills into Amazon’s effort to upend the book industry by moving into the publishing business. The piece by Brad Stone tells the story of Larry Kirshbaum, the former Time Warner Book Group chief who is now heading up the New York-based publishing efforts for the online retailer.

It’s a good primer on the topic, exploring the evolution of economics and the creative process. Amazon is able to share a larger cut of book sales with authors — and take a larger share for itself — by removing the traditional publishers from the equation. The core question: What is the value of book publishers?

Two anecdotes toward the end of the piece illustrate this well:

Kirshbaum’s rivals predict, perhaps wishfully, that Amazon is about to get an education in the burdens of book publishing. “They will understand there’s a reason publishers exist, and it’s not just to hike up prices,” says Morgan Entreken, the president of Grove/Atlantic. The late-night phone calls from neurotic authors, the frantic edits on awful manuscripts—this is a business that demands more handholding than Amazon generally seems comfortable with. Then again, Amazon can deliver a trampoline or a 20-pack of ramen in 24 hours, so it’s fairly comfortable with complexity.

“Publishers are selling drinks on the Titanic,” says Joe Konrath. “They are doing so much to protect their paper industry that they are disregarding the needs of customers and are treating authors poorly.” Konrath was once a struggling mystery writer living outside Chicago with hundreds of rejections to his name, nine unpublished novels, and a tempestuous relationship with the publisher of two of his books, Hyperion. Then two years ago he started experimenting with uploading those books directly to the Kindle marketplace. Now, under the name J.A. Konrath, he says he’s making about $4,000 a day and collecting a 70 percent royalty on every book he sells.

Seattle librarian Nancy Pearl also makes a cameo in the story, discussing the negative reaction to her deal with Amazon to publish previously out-of-print books. Stone writes that Pearl says the reaction was so negative that she stopped checking social media. “I suspected people would not be happy with this,” she says. “But I didn’t expect the vitriol.”

Previously: Jeff Bezos on innovation: Amazon willing to be misunderstood for long periods of time