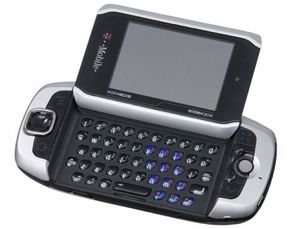 Last night, as the clock ticked down toward the shutdown of the online service for legacy T-Mobile Sidekick devices, I put a message out on Twitter in search of people still using the devices.

Here’s the best response I received — demonstrating how much passion the Sidekick stirred up among its user base. It was typed out on a Sidekick 3 and sent over the T-Mobile data network with literally minutes to spare. I responded this morning by asking for more information about the person, but haven’t yet heard back — presumably a sign that the data service has, in fact, been shut down.

I’ve been using my Sidekick 3 since August 2006. I actually got one on launch day July 10 but had buyer’s remorse.

This is kinda rushed since I’m afraid the servers will go down any minute.

Hiptop is IMHO the best most well-thought-out mobile OS and device. Sure, it’s gotten out of date but the nice things about it are really nice.

Email is what Sidekick does best for me. Sure, it doesn’t do IMAP properly but I’ve gotten by decently enough with forwarding and BCCing sent mail. Not to mention instant arrival and text editing and AutoText.

The four main buttons are intuitive. One can always jump to the home screen or multitask in a certain way. The menu button always has some context, whether it’s the current application or selected text. I can cut, copy, paste, undo, and redo to my heart’s content.

The back button is always relevant to what’s on screen, and always does what one would think it should do. And it’s right there on the bottom right side where it should be. Why the hell is iPhone back button on the top left side?

There are many ways of getting around things on screen. Directional pad, trackball, menu+trackball, alt+trackball, the send/end buttons for page up/down. I like to page up and down in discrete increments. Flicking on a touchscreen is degenerate from my point of view.

I can fly away on this keyboard typing with four fingers by holding the device with my thumbs at bottom center, ring fingers at top, and pinkies underneath. The screen on a phone should be smaller to allow this kind of grip. In other words, the sliders that have a screen the width and length of the whole chassis are doing it wrong.

iPhone can suck it. I’ve been an Apple user and fan for 20 years but I’m just so sick of them now. They no longer make things that appeal to me and I’m tired of the emotional rhetoric. Android is ugly, Sidekick 4G being no exception. Not interested in any others. I’m going to try webOS next. It looks really nice. I wish Palm would do a Hiptop-style device so I can do this funky keyboard grip.

Have you seen Aaron Swartz’s remembrance? I love his description of the Danger UI designers.

If you’re just catching up to this story, yesterday was the final day of life for the online service from Microsoft subsidiary Danger that has long powered the Sidekick devices. Users of Sidekicks released before this year will still be able to make calls and send text messages, but they won’t have the service that serves up contacts, photos, and other data-driven features.

T-Mobile has already launched a new Sidekick based on Android, separate from the Danger servers.

See our earlier Danger Sidekick retrospective for more about the impact of the device.