Google continues to gobble up office space in the Seattle area, expanding its operations in Fremont and establishing a mysterious new facility in Bothell, GeekWire has learned. The addition of more space in Fremont, where the company has operated an engineering center for the past four years, is not a surprise since Getty Images just vacated its headquarters in the neighborhood. After Getty decided to move to the International District, Google pounced on the space.

But what’s even more interesting is the new office space in Bothell, located northeast of Seattle. Google is being a bit cagey about what’s going on there, releasing this short statement when asked about it.

“We’ve relocated a group of employees from our Kirkland office to (a) nearby facility,” the statement said. A Google spokesperson later confirmed that the facility is in Bothell, but declined to say where or offer more details.

UPDATE: GeekWire’s Todd Bishop stopped by the new office space today, and reports that it is still being built out with construction crews working on the interior. 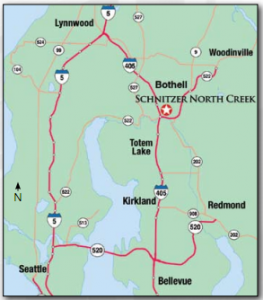 In terms of the Fremont facility, the company had already sublet space in the Getty headquarters, but the new arrangement adds even more room for the company’s growth.

A spokesperson for the search giant declined to say how much space it secured in the Getty deal. And Brian Bershad, Google’s Seattle engineering director, issued this short statement when the company was contacted by GeekWire today.

“We’re excited to expand our presence in Seattle,” said Bershad. “There’s a strong pipeline of talent in Washington and we now have more than 850 employees in our Seattle and Kirkland offices working on a variety of key products including Google Search, Chrome and Google Plus.”

Interestingly, the statement makes no mention of the new Bothell operation. However, with three facilities located throughout the region, the company could be able to draw on technology talent no matter where they live. That could become even more important after tolling takes effect on the 520 floating bridge, which connects Seattle to Bellevue, Kirkland and Redmond.

So, what’s next? Google Renton?

Given the growth of the company in recent months, I wouldn’t rule it out. During the second quarter, Google added 2,400 employees worldwide, bringing its total workforce to 28,768 employees.

The company established its first office in Kirkland in October 2004, and it has quickly grown from a handful of employees into a thriving engineering center. A new 55,000 square foot building was just opened in June in Kirkland to accommodate the growth.

The growth spurt in Washington state comes as Silicon Valley tech giants — including Facebook, Zynga and Salesforce.com — establish engineering offices in the Seattle area. Just last month, we reported that Facebook is already looking at expanding its operations in the region, eyeing space that could accommodate up to 200 more workers.

I think it is safe to say that the war for talent in Seattle is heating up.