Over the weekend we posted Valve co-founder Gabe Newell’s recent comments about the pricing experiments that the company conducts using its Steam distribution system for PC games. During another portion of the same WTIA TechNW panel, Newell shared his thoughts on the future of game consoles — predicting that Apple will bring about big changes in the living room.

Newell’s comments came before the recent reports that Apple is working on what Steve Jobs believed to be a breakthrough television experience, based what Jobs told biographer Walter Isaacson before the Apple co-founder died.

During the Oct. 11 WTIA panel, the subject of consoles was raised by moderator Ed Fries, the former Microsoft games chief, who pointed out that the next wave of consoles is late to market. Nintendo plans to release the Wii U next year, but under a traditional five-year product release cycle, Microsoft and Sony would have already unveiled successors to the Xbox 360 and PlayStation 3.

Fries asked, “Is this going to be the last generation of consoles?”

Samantha Ryan, the Warner Bros. Interactive Entertainment executive, said consoles will be around for a while but added that she’s hoping to see the console industry become more open to different types of content, and more flexible in terms of pricing.

Fries then turned the question to Newell: “Should consoles be more open, less curated?”

Here’s the rest of their exchange …

Newell: That speaks to how we think about platforms. I think there are four pieces: there’s the Internet, there’s desktop, there’s the living room and there’s mobile.

The living room’s ability to exist independently from those others is gone. I have no direct knowledge of this, but I suspect that Apple will launch a living room product that redefines people’s expectations really strongly, and the notion of a separate console platform will disappear concurrent with Apple’s announcement. I think that the platform that’s going to win in the long run is the one that provides the best tools to content producers and to consumers for producing and discovering the right content. I think a closed model is exactly the wrong philosophical way to approach that problem.

I worry that the things that traditionally have been the source of a lot of innovation, there’s going to be attempts to close those off, so that somebody will say, ‘I’m tired of competing with Google, I’m tired of competing with Facebook. I’ll apply a console model or mobile model and exclude competitors I don’t like from my world.’ The success that Apple has had, the success that Xbox Live has had, is incorrectly signaling to people what the right strategy is, and they’ll pick exactly the wrong lessons to learn from that.

Fries: I just want to make sure I understand. So you consider Apple to be closed, not open? 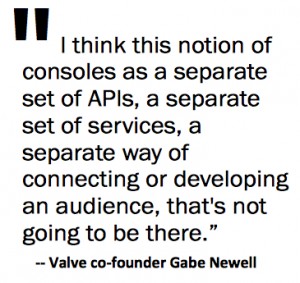 Newell: I consider Apple to be very closed. Let’s say you have a book business and you are charging 5 to 7 percent gross margins, you can’t exist in an Apple world because they want 30 percent, and they don’t care that you only have 7 percent to play with.

Fries: How is Steam different? Because you run your own digital distribution system that has its own tax.

We’re only generating money when we’re directly contributing to a sale. Our tools and services are free to use, regardless of distribution channel. If we were to create a hardware platform of our own, and put our stuff on it, the first people we would want to stand up on stage with us would be people who built competitive distribution signals, so that people understood that we actually value openness and alternatives as being critical to the long-term viability of the entertainment and games industries.

Later, during the audience Q&A, I asked Newell to expand on his thoughts about the future of consoles.

Newell: I think this notion of consoles as a separate set of APIs, a separate set of services, a separate way of connecting or developing an audience, that’s not going to be there. I think it’s highly likely that we’ll continue to have high-performance graphics capability in living rooms. I’m not sure we’re all going to put down our game controllers and pick up touch screens — which is a reasonable view, I’m just not sure I buy into it.

But this notion that consoles will exist as a separate island, as opposed to hey, you like to play a Batman game and you view it as a continuous experience between your mobile devices and your living room, and then when you’re at work, I think the latter is a lot more likely.

Previously on GeekWire: How Valve experiments with the economics of video games