Sometimes you just can’t find a friend to go to the ball game, the sushi restaurant or the lecture at the university. For those moments in life, Urbandipity wants to be there. Six Seattle engineers, many of whom have known each other since middle school, launched the social networking site earlier this month.

Their goal? Get folks away from their computers, interacting with real people in the real world. We chatted with co-founder Nick Talwar (who we actually met at a real world event last month) about the ups-and-downs of startup life, including how they dealt with a cease-and-desist order and why it’s critical to “fail fast.”

Explain what you do so our moms can understand it: “Urbandipity helps you get out and do something fun with people who like what you like.”

Inspiration hit us when: “We graduated from college a few years ago, leaving our friends behind. Suddenly, we were tossed into real world jobs with people of all ages who didn’t have a lot in common with us. There seemed to be so many things we wanted to do and check out, but few people willing to join. The Seattle Freeze … was in full effect, so we decided to do something about it.”

VC, Angel or Bootstrap: “Bootstrap. When it’s your personal money funding the startup, you learn to prioritize investments and costs in a shrewd manner.”

Our ‘secret sauce’ is: “The friendship and trust we have between our founders. I’ve known some of my fellow co-founders since middle school and we’ve been working and dreaming about doing something like this for a long time. We understand each other’s strengths and weaknesses well, complementing each other nicely. From school, to college, and now, we’ve worked on countless projects together as friends that have enabled us to execute well against our goals.”

The smartest move we’ve made so far: “Focusing our site around getting out and doing something fun in real life. Most social websites revolve around sitting and engaging with others online, which many people have told us they are developing an aversion towards, especially when they realize how much time a day they spend using social networks.”

The biggest mistake we’ve made so far: “Investing in online services that provide automated ways to distribute a press release to mainstream media and bloggers. It just doesn’t work. Since all the founders of Urbandipity are engineers, we thought it might be possible to exchange some investment for PR knowhow…. Getting the word out must be done the hard way: block-by-block, conversation-by-conversation.”

Would you rather have Gates, Jobs, Zuckerberg or Bezos in your corner: “We are Web developers and our service is inherently social, so Mark Zuckerberg must be the one. Zuckerberg inherently understands how people interact and where he excelled with Facebook was duplicating real-word interactions online in a scalable, intelligent and friendly way. That said … we focus on getting you off the computer and into the real world, meeting someone who likes what you like; whereas Facebook focuses on organizing your existing real-world friends online. Differences aside, he’d still be the best choice to mentor our startup and his insight would be invaluable. We would love to have Zuck in our corner.”

Our world domination strategy starts when: “Everyone in Seattle creates a post and experiences Urbandipity…. It may seem cliché and hard to believe, but all we care about is building something cool that helps people…. If you do that, there’s no need for delusions of grandeur and success will follow. “World domination”, if it comes, will happen when it does. Other cities, much less the rest of the world, will have to wait!”

Rivals should fear us because: “We are on the side of people and built a site we would personally use. Our site is free, ensures there are no “stale” users by having posts expire in 60 days, and has a modern design that’s efficient.” 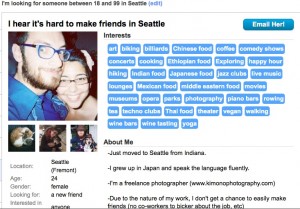 We are truly unique because: Urbandipity isn’t about trying to keep you online for hours to increase impressions. We exist to get you off our site, to be used as a tool to hang out and do something new.”

The biggest hurdle we’ve overcome is: A Cease and Desist letter. Our name used to be CafeSpark, however, after we gained a little bit of traction, a company from the UK, Spark Networks Limited, claimed our name violated their trademark and the word “cafe” in front of “spark” was a “nominal term.” Our lawyer did not agree. However, fighting the battle would have cost too much money in lawyer fees. We were forced to surrender our domain and re-brand ourselves. Fortunately, we came-up with, in our opinion, a much better name.”

What’s the one piece of advice you’d give to other entrepreneurs: “Fail fast, pick-up the pieces, learn, and apply what you learned without a fuss. The world and markets, especially technology, move so quickly; too quickly for you to dwell on mistakes and pour into sunk costs.”