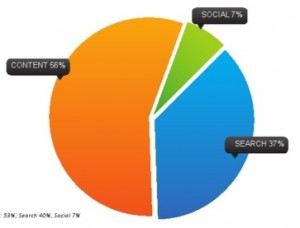 A new report out today indicates that links from online content sources — including news aggregators like Huffington Post and media sites like CNN — drive more traffic to online publishers than links via Twitter, Facebook and other social media channels. According to the report from Outbrain, 56 percent of referral traffic at Web sites comes via other content sources. That compares to 37 percent via search engines, and just seven percent via social media channels.

I was curious about the results, so I took a look at GeekWire’s referral traffic during the month of July. Not surprisingly, two of our biggest referrers happen to be content sites/aggregators: Techmeme and Hacker News. But not far behind are Twitter and Facebook.

That’s not a surprise since the Outbrain report notes that technology sites get a higher percentage of traffic (12 percent) via social networking sites.

The Outbrain report found that Twitter drives about 75 percent of social media traffic to Web sites, with the remainder coming via Facebook.

Here’s the full report via Poynter: