It may go down in history as a big business blunder. But, back in 2001, when Target picked Amazon.com to power its e-commerce offerings it may have seemed like a good idea. Today, Target is finally parting ways with Amazon, launching an online retail experience that it fully controls.

But have the tides shifted too much in retail? After all, Amazon’s market value of $87 billion is more than double that of Target.

Target has slowly been moving away from Amazon over the past few years, with CEO Steve Eastman saying in 2009 that “it is in Target’s best interest going forward to assume full control over the design and management of Target’s e-commerce technology platform, fulfillment and guest services operations.” 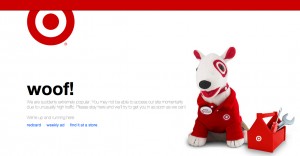 Now, that day has finally arrived. And the Minneapolis-based retailer has rolled out a site that is beautiful to look at — complete with a white dog (showcasing the company’s trademarked bullseye logo over his left eye) helping to guide the way.

I should say that is beautiful when you can see it. The site was crawling when I tried to access it this morning, and my first attempt was met with the error message you see to the side.

Not a great first impression.

Meanwhile, what does the loss of Target mean to Amazon? Well, as we noted above, this departure has been anticipated. But Baird financial analyst Peter Benedict notes that it could have an impact on Amazon revenues. He writes in a research note:

“We believe that e-commerce became strategically too important for Target to outsource this business to Amazon, in particular given the increasing competition between the two companies. Nonetheless, Target was a source of high margin commission revenues for Amazon (we estimate in the $100M+ range) on roughly $1.2 billion in Target.com merchandise volume.”

Benedict notes that a number of large retailers have left the Amazon nest in recent years, including Toys-R-Us and Marks & Spencer. But the departures are not a surprise given Amazon’s new weight in the retail industry.

Things have come a bit full circle in the partnership between Amazon and Target. After all, Target became the first brick-and-mortar retailer in June to start selling Amazon’s electronic reading device, the Kindle.