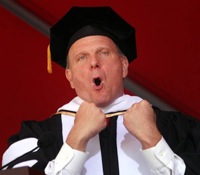 It’s often the delivery that makes for a good graduation speech, as much as the message, and based on this LA Times photo at right, it looks like Microsoft CEO Steve Ballmer dished out plenty of his trademark enthusiasm during his address Friday at the University of Southern California commencement ceremonies.

More evidence: Seattle Seahawks coach Pete Carroll, formerly the USC football coach, tweeted that he heard Ballmer was “the bomb” during the ceremonies (as noted by the Seattle Times).

Ballmer also showed lots of spirit when it came to the company’s $8.5 billion deal to acquire Skype. “I thought I might have to Skype in,” Ballmer told the audience, according to the official USC News story about the ceremony, which notes that he urged the graduates to “Skype on!”

As for Ballmer’s actual message? Here’s how USC News sums it up: “Ballmer used his experience from Microsoft to illustrate his three key lessons for graduates: great ideas matter, find your passion and be tenacious and irrepressible in its pursuit.”

Hmm, OK. Inspiration and insight can often sound clichéd in translation, so we’ll give Ballmer the benefit of the doubt based on Carroll’s second-hand endorsement. We’re on the hunt for a video or transcript but haven’t uncovered one yet. (No coverage yet by the Daily Trojan student newspaper.)