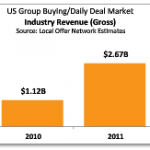 Maybe there actually is some room for all of those Groupon clones.  A new report out from Local Offer Network estimates that Americans will spend a whopping $2.6 billion on daily deals this year, up from $1.1 billion last year. It also finds no shortage of competition for those dollars, with the daily deal aggregation site tracking more than 320 daily deal sites operating in the country.

Groupon is by far the leader. The Local Offer Network projects that the Chicago company will pull in $3 billion to $4 billion in worldwide sales this year, with TechCrunch estimating that Groupon will own roughly 50 to 75 percent of the U.S. market.

No wonder the company turned down that $6 billion offer from Google. Nonetheless, a number of Seattle area companies are looking to take a bite out of this expanding pie, including venture-backed startups like Tippr and upstarts like Daily Ticket.

Earlier this month, GeekWire compiled a list of 14 daily deal sites in the Seattle area, each trying to carve out its own unique niche. [Previously: Following in Groupon’s footsteps, a parade of daily deal sites]

So, is a bubble forming? And can anyone really surpass Groupon’s lead? 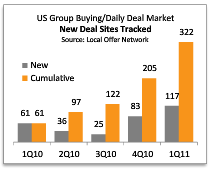 There are certainly plenty of entrepreneurs trying. Local Offer Network has tracked 322 daily deal and group buying sites in the past 14 months. That’s up from 117 that were tracked by the company during the first quarter of last year.

Local Offer Network also reported that a whopping 40,000 deals have been published in the first quarter of this year, compared to 63,000 for all of last year.

And where does Seattle rank in terms of daily deals? It is tied with Austin and Minneapolis in terms of the percentage of offers published.  Chicago remains in first place, followed by New York and San Francisco.

Despite the massive growth, the report indicates that there’s still a lot of room for expansion, with deal sites operating in 80 markets. “Geographic expansion will continue,” the report says. “Somewhat ironically, national online retailers may enjoy the greatest advantage in smaller cities and towns because of the challenge of gaining critical mass in these markets.”