Having studied the work of W. Edwards Deming and other pioneers in just-in-time auto production back in college, I was intrigued when I found out that a leading expert in applying those practices to software development, management consultant David J. Anderson, is located (relatively) nearby in Sequim, Wash.

He’s a veteran of companies including Microsoft and Corbis, and his presence has helped make the Seattle region a hub for kanban, the concepts originally developed by the late Toyota production engineer Taiichi Ohno.

So I couldn’t help but ask Anderson a few questions via email about kanban — including how companies are using it, and how we can apply the concepts to our daily lives. Continue reading for his responses.

For the uninitiated, what is kanban, and why should people care about it?

Anderson: Kanban is a way of visualizing invisible knowledge work activities such as software development, and limiting the quantity of work in progress. Limiting work-in-progress has several benefits: by avoiding over-burdening, quality is often significantly higher, while workers are happier and better motivated; delivery times are usually significantly shorter and far more predictable; priorities are often clear and prioritization decisions are simplified.

Kanban is also helping organizations improve their methods of working in an incremental, evolutionary fashion with reduced resistance to change and adopting new ways of working and collaborating together. Most managers appreciate that resistance to change is a major impediment to improving the economic performance of their business. Kanban is addressing this problem.

Many people associate kanban with the production of cars. How can it be applied to software and the web?

Anderson: It’s the same principles — limit work-in-progress and use a visual card system to signal availability to start new work. However, the implementation is different for knowledge work activities and the benefits are significantly different. In manufacturing, kanban systems help to reduce inventory holding costs, shorten lead times and make deliveries more predictable. In knowledge work we’ve discovered that their are many soft benefits including higher levels of trust and collaboration. 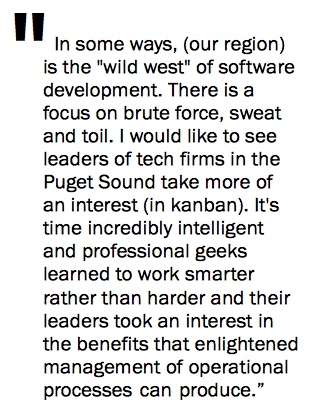 How does kanban differ from Agile systems like Scrum or Extreme Programming? (What the heck are those, anyway?)

Anderson: Agile methods for software development and project management tend to be prescriptive process definitions which seek to enable better ways of working. They are based on a few basic principles: it’s better to make progress with imperfect information and revise later than to wait for better quality information; it’s worthwhile to drive for high quality initially than to drive quality through quality assurance testing and rework late in the cycle; there is a dividend for encouraging a high level of trust and reducing negotiation, contracts, audit and arbitration in working relationships; and knowledge work such as software development is perishable so you should seek to reduce delays and focus on short delivery cycles.

All of these ideas are worthy and useful. Kanban also encourages these. However, it does so in a non-prescriptive, emergent way. Kanban is something you apply to an existing process to catalyze suggestions for improvement and to control variability that adversely affects predictability. The principles of Kanban are: start with the process you use now; agree to pursue incremental evolutionary change (rather than a dramatic change to a new (perhaps Agile) process); initially, respect all current roles, responsibilities and job titles.

Can the rest of us learn anything from the principles of kanban to improve how we go about our daily lives?

Anderson: Many people already are! There is an entire “personal kanban” movement and a book published on the topic by my friend Jim Benson. We’ve seen law offices in New Zealand and architects in South Africa as well as school teachers in Pennsylvania using Kanban to help organize their work and improve service to their clients (or students.)

You’re credited with the first implementation of kanban for software development, when you were working at Microsoft. What was the project, and how did the kanban implementation work?

Anderson: The first kanban system implementation was with a department in Microsoft’s IT division. Most of the team were based in Hyderabad, India but the management was in Redmond. With that team, the changes we made improved productivity by 230%, reduced lead times from an average of 5 months to less than 3 weeks, and improved on-time delivery from 0% to 98%. All of this was achieved over 15 months. Emboldened by that success, I tried it again at Corbis in Seattle 2 years later. Kanban as adopted around the world today is based on the more elaborate implementations first seen in the Corbis IT department in 2007. 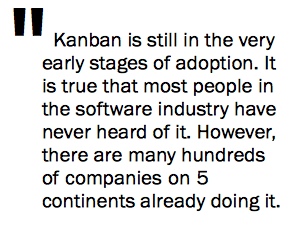 What about kanban originally got you so excited?

Anderson: I was initially excited by the productivity and lead time improvements and how easily these were achieved with very little or no resistance from staff. Later, I got a lot more excited by the evident psychological and sociological benefits and the emerging evidence from the around the world that the approach was repeatable and consistent.

To what extent do software and other tech companies use kanban in their daily operations today?

Anderson: Kanban is still in the very early stages of adoption. It is true that most people in the software industry have never heard of it. However, there are many hundreds of companies on 5 continents already doing it. Some have very large, successful and well documented implementations. Firms such as the BBC in London, Globo and Petrobras in Brazil, Amdocs in Israel, Vanguard is a well known American adopter. Recently, we see Deloitte adopting it in their consulting practice and implementing it with federal and provincial government in Canada. We’ve held six conferences over the last 3 years and are attracting around 600 to 700 people each year. Speakers come from all over the world including Australia, New Zealand, Brazil, Argentina, South Africa, Israel, and many parts of Europe and North America. Kanban is making a big difference across the world.

Are there any particular technology companies doing a particularly good job of implementing kanban?

Anderson: I think the highlights are BBC, Globo, Petrobras, Lonely Planet, IPC Media, Spotify but we also see many smaller firms who are not so well known having great success with it including Constant Contact in Boston, Ultimate Software in Fort Lauderdale. We know of a number of top retail and investment banks who’ve adopted it and are finding it useful.

What other industries would benefit from these approaches?

Anderson: Well we do see people adapting the ideas in other industries, however, our own focus is on software and product development and IT services for now. It is likely that all service-oriented knowledge work businesses could benefit from the approach, but one thing at a time. ;-)

Is it true that the Puget Sound region is the Kanban Capital of the World? How in the heck did that happen?

In terms of the thought leadership the Puget Sound is definitely the leader. So far all the authors who’ve published books dedicated to Kanban and its applications in knowledge work have come from the Seattle area. They are all connected to me professionally and/or socially. However, the high tech firms of the Puget Sound area are definitely laggards in adoption. Countries like Sweden and Germany are way ahead. In some ways, this is the “wild west” of software development. There is a focus on brute force, sweat and toil. I would like to see leaders of tech firms in the Puget Sound take more of an interest. It’s time incredibly intelligent and professional geeks learned to work smarter rather than harder and their leaders took an interest in the benefits that enlightened management of operational processes can produce.

What have you learned from the work of W. Edwards Deming, Taiichi Ohno and other pioneers in this field? If you could sit down and have coffee with  one of them, who would it be?

Anderson: Deming’s work is core to everything we do. I think his book, The New Economics, is a seminal work in management thinking. His influence will not fully be understood until well into the 21st Century  and long after his death. If I could have coffee with just one of these process and management science pioneers it would be Deming.

How did you end up in Sequim?

Anderson: That’s not a Kanban related question ;-) I enjoy the quiet life away from the city when I am not working. I enjoy the beaches and the mountains. I grew up on the west coast of Scotland so it reminds me of home but with nicer weather and higher peaks.