Cliff Mass, a professor of atmospheric sciences at the University of Washington, found himself in a tempest of a different sort last week after KUOW-FM in Seattle discontinued his weekly weather segments.

KUOW “Weekday” host Steve Scher explained in a note to listeners that he made the decision after Mass “began inserting his opinion on a wider range of issues outside of science and weather, most notably education.” Scher continued, “Although we value Cliff’s opinion, I do not want the weather segment to become an opinion and views segment.”

Setting aside the controversy over the station’s decision, the dustup made us want to hear more of his opinions and views on science and math education. So we called Mass up and asked. And we went on to have a great discussion on a whole range of topics, including the influence of Carl Sagan on his career, the role of his widely read blog in his scientific outreach, the impact that the Coastal Radar system will have on forecasting — and, of course, this crazy spring weather we’ve been having.

Continue reading for edited excerpts from our conversation.

Q: What are the key issues in science and math education, as you see them? As a society, as a state, what do we need to be doing?

Mass: First there’s what I’m trying to do. I felt that it’s important for scientists to communicate science directly to people. We were particularly well-equipped to do it because we had an intimate knowledge of the science, we had a passion for the science. That was one thing I learned from Carl Sagan. I used to spend a lot of time with him, and he really felt that was important. He convinced me, as a very impressionable young guy, that scientists needed to be doing that. I think that’s very important. 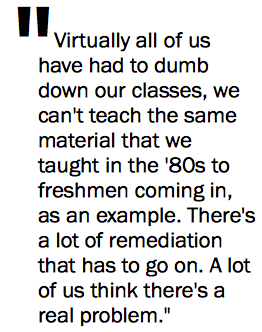 To answer your question, what I have seen is a substantial decline in the math abilities and the science knowledge of the students coming into the University of Washington. It’s not just here, but there really has been a substantial drop. Virtually all of us have had to dumb down our classes, we can’t teach the same material that we taught in the ’80s to freshmen coming in, as an example. There’s a lot of remediation that has to go on. A lot of us think there’s a real problem. It’s clear that the K-12 education system is failing, and something needs to be done about it.

But the other thing we know is that a lot of the books that we used, and are still being used in many of the schools are inferior. And many of them what we use what we call “discovery approach,” which we believe is failing and needs to be replaced. That’s been a major impetus that we’ve been working on, getting first-quality math books into the schools, and first-quality curriculum. Some districts we’ve been successful in, like Bellevue or Northshore or Shoreline, and there’s other districts where we’ve failed, like Seattle.

Q: What is the discovery approach and how does it differ from the traditional approach to math and science?

Mass: In the discovery approach, the idea is that you don’t teach students, really. You don’t show them how to do something and then have them practice and develop skills and proficiency. The idea is they have to sort of figure it out themselves. It’s based on a lot of work with calculators, a lot of group work, a lot of work with manipulatives, with objects, and counting things. They do not believe in direct instruction. Basically saying, this is the best way to do it, here are some examples. That’s a certain philosophy of learning that we think is completely failed, and we think we have the numbers to prove it. But in any case, that’s the tension. We think those books need to be replaced by other books — the kind of books that are used in the countries that do best in math education.

Now, you can have plenty of applications, creatively using information that you have and the algorithms that you’ve learned, but discovery basically tries to have students figure it out and flail around themselves, and not start with that direct instruction.

Q: What is next for you? I’m sure you’ve gotten inquiries from other media about regular gigs. 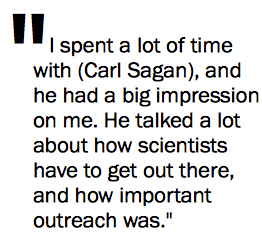 Q: What are you planning to do next to continue your outreach on a scientific level?

Mass: First, I have my blog, which has substantial reach. You know, I get 8,000-9,000 uniques a day. When the weather gets interesting, I can have 50,000. So I have that. And I also talk to a lot of other media other than KUOW. I’ve been on a number of talk shows, a number of programs, and that’s not going away. And I deal with the print media, and that’s not going away, either. I’m thinking of adding a podcast, and I have offers from a number of radio stations, even TV stations. So I can easily move over to fairly significant stations with as big a market as KUOW, if not bigger. I’m going to do that eventually. Right now I’m still hoping that the KUOW folks will change their minds, but I’m not going to wait forever.

Q: Tell me the story of how you met Carl Sagan, and how you grew up in science.

Mass: I went to Cornell University, undergraduate, and I was trying to decide whether I wanted to go into astronomy or meteorology. I didn’t know, wasn’t sure. So I picked a place that I knew had both. And also, I knew he was there. I had read his books. So I went there. And then I took a class, actually a graduate class, on planetary atmospheres, with him. So I got to meet him there. And actually I got very friendly with him. I used to have coffee with him, and I really got to know him quite well.

And I did a project that really turned out quite well, I did a numerical model of the Martian atmosphere. I do a lot of numerical modeling, that’s the kind of thing I do professionally. So I did this work, and he said, let’s do a paper together. So that’s my first paper. It’s with him. I spent a lot of time with him, and he had a big impression on me. He talked a lot about how scientists have to get out there, and how important outreach was.

Q: How did you come to the Pacific Northwest?

Mass: Because of Carl Sagan, really. I had applied to several departments. One was MIT and one was here. They were the top departments. I accepted at MIT, I was from the East Coast, and I got back to Cornell, and he said, you made the biggest mistake of your whole life. Go to Seattle and you go visit that place. They’re better, and they’re going to be the best department in the world, if they’re not already. You don’t say no to Carl Sagan. So I got on the plane, and I came out here, and I really liked the department. So I decided to come here, and I told MIT I wasn’t going there. I went to graduate school here, and then I got really interested in Northwest weather. 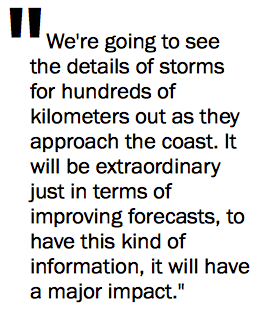 Q: Coastal Radar is another project you’ve championed. What can people do to help, and why is that important?

Mass: Well, people have already done their job. People have helped. We spent 15 years pushing it, and so many people wrote letters, so many people contacted their Congressman and they’re Senators, there has been a lot of people involved, and we have it. The radar is being put up right now. It’s reality. By the end of September, it will be running.

Q: How will it change what you do?

Mass: Oh, it’s extraordinary. It’s going to be revolutionary. We’re going to see what’s coming in off the ocean. We’re going to see the details of storms for hundreds of kilometers out as they approach the coast. It will be extraordinary just in terms of improving forecasts, to have this kind of information, it will have a major impact. But then more technically, we can assimilate the information offshore, and get all the information the radar gives us and then put that into our numerical models and use that to improve forecasting not only on the coast but downstream, as well.

Our numerical models have gotten better, but occasionally we make mistakes. Sometimes they don’t get that storm coming in, but now we’ll have that protection — the last six hours or nine hours before it hits, we’ll be able to see details of storms coming in. So I think you’ll be able to see substantial improvement in forecasting. And the other thing is that people along the coast don’t have radar. We’re used to radar. They haven’t had that, so it’s pretty exciting.

Q: Since I’ve got you on the phone, I’ve got to ask: What’s with the crazy weather this spring?

Mass: Well, La Niña contributes to it. Certainly in La Niña years you tend to have snowier and wetter, colder weather into the spring. But this one is so extreme, it’s La Niña plus natural variability thrown in.