Yoky Matsuoka has long been interested in the frontiers of human interaction with machines, exploring new ways for the nervous system to work in conjunction with robotics and other mechanical devices. 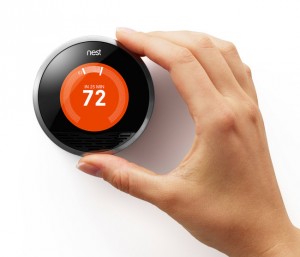 In 2011 the University of Washington associate professor pushed that work forward on two fronts — inside the research lab, and inside a thermostat.

Matsuoka, a past MacArthur Genius award winner from the UW Computer Science & Engineering Department, this year became the director of a new Engineering Research Center for Sensorimotor Neural Engineering, funded with an $18.5 million grant from the National Science Foundation.

She’s also vice president of technology at Nest, a Palo Alto-based startup marketing an intelligent, connected home thermostat that learns from the user’s habits as a means of programming itself. The company, founded by veterans of Apple’s iPod team, launched the $249 device this month and has been featured prominently in the national media.

How do these two world relate? Matsuoka answered that question in an email to GeekWire this week …

I am interested in the intersection of human and device control and learning.

If I had a diagram to write, I would draw two objects: human and device.  And I would put an arrow from human to device and another arrow from device to human. This forms a closed loop.

There are several things we can say with this diagram:

With Center for Sensorimotor Neural Engineering and Neurobotics Laboratory, we use this closed loop to improve the current status of physical assistance for the disabled, neurological rehabilitation, and even how elderly population grows older.

With Nest, we use this closed loop to improve how individuals save energy.

Most exciting, she said, is that “they both address national problems while improving quality of life.”