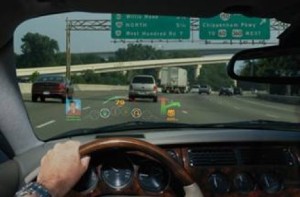 Could there be an easier way to access information as you drive?

MicroVision, a maker of laser display technology, believes so. And today the Redmond company is announcing a new deal with an undisclosed automaker, placing its PicoP head-up display technology into its test vehicles.

The company said the deal marks the first time that itsPicoP technology has been implemented inside a “mass production car model.” The vehicle is set to be introduced some time in 2014.

“Automotive HUD applications offer a real opportunity to make roads safer for us all, by placing critical information directly in front of drivers, keeping them focused on the road,” said Alexander Tokman, president and CEO of MicroVision.

MicroVision’s PicoHUD technology allows vehicle monitoring, navigation, radio controls, and other information to be projected directly on the windshield of a vehicle.

“With critical information being displayed within the driver’s direct line of sight, distractions caused by looking down at center console panels or instrument clusters are eliminated,” the company said.

Shares of MicroVision have fallen 34 percent this year.