Microsoft’s video this week unveiling the new Windows 8 interface was remarkable not just for the content but for the production values. Which is to say, there really weren’t many. 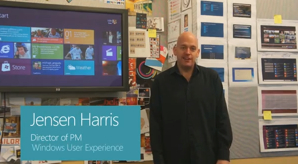 Jensen Harris, director of program management for the Windows User Experience team, might as well have been some kid on YouTube as he stood in the team’s workspace, talking without a mic toward a relatively low-quality camera, before leading viewers through the new UI.

And people are eating it up, with more than 2.4 million views so far on YouTube, not counting a separate version on Microsoft’s site. By comparison, Twitter’s slickly produced video, introducing its new photo-sharing and search features on the same day, has received a mere 175,000 views.

Whether or not Microsoft planned it this way, the approach was a stroke of genius, says one product demo video guru, Miguel Hernandez, in a post about the Microsoft video on his Grumo Media blog. What matters is the content, not the production.

This little video can do much more good for the bad rep Microsoft has gained over the years than millions spent on PR campaigns to make them look better or cooler than Apple. …

That is what the YouTube generation has showed us. Thousands of zero budget crappy looking videos getting millions of views, why? because they are entertaining, they are surprising, they are inspirational, they are just plain stupid, they may look like crap but you know what?.. they are HUMAN, and nothing can surpass that.

The video is touted as the first in a series from Microsoft, so presumably we’ll be seeing more of this approach.