A Microsoft television ad that debuted Sunday night is the beginning of a new campaign that aims to connect and boost the company’s major retail products — Windows, Office, Xbox and Windows Phone — in the minds of consumers. 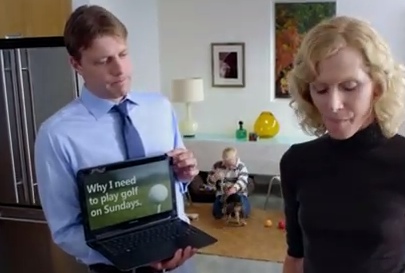 It’s one of the largest campaigns in Microsoft’s history, a global initiative running in 35 countries and regions.

Timed for the holiday shopping season, it comes as Microsoft’s consumer technologies face strong competition from Apple, Sony, Google and other major tech brands in stores around the world. Windows and Office are trying to overcome the sluggish economy, Xbox 360 is looking to maintain its momentum, and Windows Phone just needs people to know it exists.

For Microsoft, the campaign is unique for the way it will bring together those multiple products, aiming to create a halo effect.

For example, the little-known Windows Phone could benefit from an association with the “trust and credibility” of Windows and Office, which in turn could benefit from the “energy and excitement” of the Xbox, said David Webster, the company’s chief marketing strategist.

“We think of it as a family portrait, if you will,” Webster said. “Instead of looking at individual products, we’re seeing the group shot.”

That concept of family has double-meaning. The tag line for the campaign is “It’s a great time to be a family.” As reflected in the first ad, Microsoft will use the commercials to offer a positive take on the influence of technology on families, in contrast to the “alone together” syndrome in which people sit in the same room but interact with their screens rather than each other.

“Technology is just a tool. It’s like fire. It can heat your house. It can burn your house down. It’s all in the manner of how you end up using it,” Webster said. “In our case, we really strive to make products that excel at bringing people together.”

The fact that Microsoft doesn’t have a major consumer product launch this holiday season, apart from the Windows Phone 7.5 “Mango” update, is another reason the company decided to take the multi-product approach.

Microsoft isn’t saying how much it’s spending on the latest campaign. But it’s easily one of the biggest ever rolled out by the company — considering the global scope, the multiple products and the focus on TV ads and online video. Using past campaigns as a benchmark, that translates into hundreds of millions of dollars.

Webster said he doesn’t exactly have a scoreboard in his office ranking Microsoft campaigns historically, but he acknowledged that it’s “a significant investment on our part to tell a story this broadly.”