The company this afternoon reported profits of $5.74 billion, or 68 cents a share, matching the consensus of analysts polled in advance by Thomson Reuters. Microsoft’s sales for the quarter were $17.37 billion, up 7 percent from a year ago and a record for the quarter.

Microsoft shares are down about 1 percent in after-hours trading.

The Microsoft Business Division’s sales of $5.62 billion, up 8 percent, were notable in part because Office 2010 was launched a year ago, making for a tough comparable this quarter. 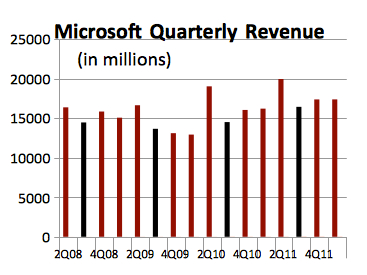 “We had another strong quarter for Office, SharePoint, Exchange, and Lync, and saw growing demand for our public and private cloud services including Office 365, Dynamics CRM Online, and Windows Azure,” said Kevin Turner, Microsoft chief operating officer, in the company’s earnings release.

Windows didn’t fare as well. Sales of the Microsoft operating system come primarily through new PCs, which have been experiencing meager growth. Revenue in the Windows & Windows Live Division rose 2 percent, to $4.87 billion, while profits fell 1 percent, to $3.25 billion, due in part to higher sales and marketing expenses for Windows and Windows Live.

In a sign of modest progress for Microsoft’s web search initiatives, the company’s Online Services Business reported a slightly narrower loss of $494 million, compared with a loss of $558 million in the same quarter last year. Microsoft’s Bing search engine has been spending heavily on distribution deals and promotions to catch up to Google, but it reported lower sales and marketing expenses in the recent quarter.