Seattle Mayor Mike McGinn today laid out a proposal to encourage broadband Internet in a four-block area in Pioneer Square, allowing telecom and cable companies to lease some of the conduit that the city is now placing under First Avenue South. McGinn said it is a small, incremental step in a larger plan to bring high-speed Internet to the parts of the city that need it, tapping into some 500 miles of “dark fiber” that’s not being utilized.

“We want take advantage of our existing fiber optic cable, and our ability to connect companies up to it that need it,” said McGinn during remarks along First Avenue this morning.

If no one bids on the Pioneer Square project, then McGinn said the city will look into “whether we can just do it ourselves.” The city is hoping that the fiber could be installed later this year.

High-speed Internet in the historic Seattle neighborhood is notoriously bad. (I wrote this post from our developer’s offices along First Avenue, and the Internet speeds are far worse than what I get at home. It took about 40 minutes to upload a 2-minute video to Facebook).

And what does that mean for the techies who are flocking to the neighborhood?

“What we are able to get in Pioneer Square is about half the speed of what you’d be able to get in your home,” said Strain. “So, it is not really suitable for the sort of media rich businesses that we are trying to build down here.”

If the city is able to attract fiber optic cable providers to the area, Strain said his company could get 100 megabit service in the area. That’s a more than 2,000 percent increase in speed.

“It is essential for us in order for us to keep our company here,” said Strain.

Other large technology companies also are moving into the area, including Zynga which just opened a branch office in the old Washington Shoe building earlier this month and Isilon Systems which plans to relocate to the neighborhood later this year. 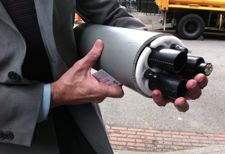 The conduit is being laid from Cherry Street to King Street on First Avenue South, with crews at Seattle City Light placing electrical conduit under the street as part of the Viaduct deconstruction project. Since the street was already being torn up, Mayor McGinn pushed a plan forward to put empty conduit under the street which could eventually house fiber optic cable. Total cost is just $60,000.

City of Seattle CTO Bill Schrier said that the fiber-optic cable will help “equalize” Pioneer Square with downtown Seattle, which is already well served by private Internet service providers. The goal, he said, would be to have the providers offer service to both residences and businesses in the area.

And McGinn said bringing fiber to Pioneer Square is part of a larger mission that he has for the city, making it competitive on a global scale.

“This is a small policy step, making our conduit available to private providers to pull cable,” he said. “The bigger policy steps would have to do with making some of the cable that we’ve pulled for our purposes available, and we are not asking for that today.”

McGinn said that they will look at expanding the program into other areas of the city if it meets with success.

“We would love, as you know, to get as many homes and businesses connected to fiber optic cable as we can. This is something tangible we can do right now. But go to Beacon Hill? I’ll tell you, I’ve been there, and usually one of the first two or three topics discussed is the quality of the service up there. It is not good. And that’s really challenging because … we still believe that businesses can be started in garages in this city and grow into big businesses. And it would be kind of nice if some of those garages could compete on a world scale too.”

Previously on GeekWire: Is the Seattle Underground the key to solving Pioneer Square’s Internet woes?