Maybe Jeff Bezos will get a few free Uber rides around Seattle now. The Amazon.com founder has emerged as one of the investors in the private car service’s $32 million venture round, which also included participation from Menlo Ventures and Goldman Sachs.

The new cash follows an $11 million round earlier this year from Benchmark Capital.

The announcement was made at Le Web in Paris, with CNET reporting that the company plans to launch in 25 cities in Europe in the next 12 to 14 months. In the remarks, CEO Travis Kalanick alluded to the company’s long-term plans for an IPO.

“Rapid global expansion means having the fuel in the tank to take things up a couple notches,” the company wrote in a blog post today. “That’s in terms of people, but also the op-ex to get cities launched.  We aspire to build an urban logistics fabric in every major city in the world – and we now have the traction and proof points to give our dream a shot at reality.” 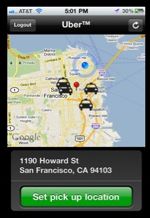 Uber allows users to book private rides in black Town Cars from their smartphones, tracking the progress of the car on a map and getting alerted via text message when the driver arrives. Fares are added to an individual’s account and tips are included. No cash is exchanged during the ride.

Uber arrived in Seattle this past summer, and I gave it a spin and interviewed my driver who was thrilled with the idea and what it could do for his business.

The involvement of Bezos — who invested through his private investment firm Bezos Expeditions — is interesting giving that Uber’s service involves the logistical-heavy task of moving people in the real world.

Amazon, for the most part, has been pretty happy operating online where businesses are easier to scale.

The online retailer does offer its own door-to-door grocery delivery service in Seattle, though the economics have been tough and the company has not yet expanded it beyond the tests here.

Perhaps. Or, maybe private drivers could use some of their spare time to drop packages off at one of Amazon’s new locker locations?