Microsoft rose to prominence in the early 1980s, largely based on a deal to brings its operating system to IBM computers. Microsoft later became the largest software maker in the world. And IBM? It missed one of biggest shifts in tech. But things change. And now, in an amazing twist, IBM has surpassed Microsoft in market value.

As of close of trading last Friday, IBM showed a market value of $207 billion. Microsoft, meanwhile, came in at $206 billion.

At one point during the PC era, Microsoft’s value climbed three times higher than IBM’s. Apparently, this has been a long two decades in Armonk, N.Y., but Microsoft also is no longer the beast it once was. The guard is changing.

As the graphic below shows, Microsoft’s stock has slumped in the past 10 years as the software giant failed to keep up in new shifts in computing, primarily Internet technologies and mobile. IBM, on the other hand, has risen 45 percent during that same period.

With IBM’s market value at $207 billion, it is now considered the second largest technology company in the world behind Apple. (Market value of $308 billion).

Interestingly, Apple is now approaching the combined value of Microsoft and Intel which stands at $329 billion. 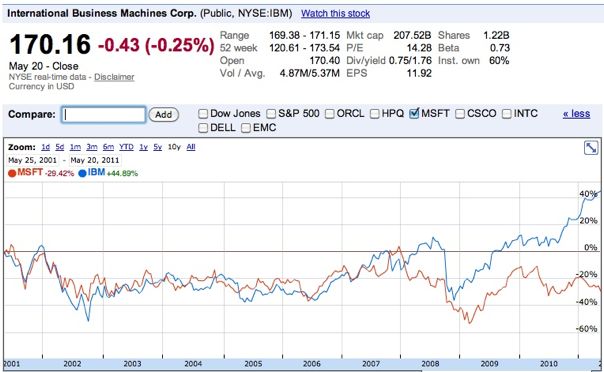