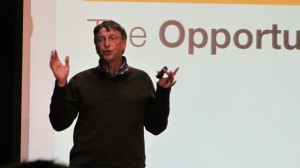 Bill Gates made a rare appearance at the University of Washington this afternoon, talking about how qualitative and measurable advances in technology are coming together for major advances in the areas he cares most about these days, including education and efforts to help the poor people of the world.

But the appearance in the UW Computer Science & Engineering Department was most memorable for the question-and-answer session with students at the end — including one student who asked Gates for advice on how she could become rich like him.

“I can understand wanting to have millions of dollars, there’s a certain freedom, meaningful freedom, that comes with that. But once you get much beyond that, I have to tell you, it’s the same hamburger. Dick’s has not raised their prices enough,” he said, referring to the Seattle-area fast-food chain. “But being ambitious is good. You just have to pick what you enjoy doing.”

Here are notes from the presentation and the Q&A session with students, not verbatim quotes but a shorthand summary to convey what was said as accurately as possible on the fly. You’ll find lots of little gems sprinkled throughout, particularly in the Q&A session.

[Update: For verbatim excerpts and a video highlight, see this follow-up post: Bill Gates on politics, education, and why his burger is same as yours.]

Gates: I used to spend time on this campus stealing computer time. There was a time when if you were addicted to using computers it was a very tough addiction to deal with. I never did get a degree here or anywhere else, but fortunately for me, my addiction to computers became easier to satisfy because of the invention of the microprocessor.

Going to talk and then answer questions. As I say things that are wrong or stimulating please think up questions to go with those.

Lots of big quantitative changes. Most dramatic change of all is cost of storage. Gone from $700/MB to .002 cents/MB in 2011. Now it’s so cheap it’s actually almost absurd. He had to adjust his thinking from old paradigm, example of where younger people without old ideas can have advantage.

A lot of the activities I’m involved with now really have modeling at the center. Full time at the foundation, still go to Microsoft, but my primary thing is thinking about the two key focuses of the foundation, helping poor people and helping the education system.

People shouldn’t forget about robotics, still lots of promise there.

Significant breakthroughs will come from this intersection of qualitative and quantitative changes.

Demo of KinectFusion. Rendering a scene in real time. 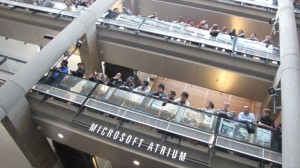 Intersection of qualitative and quantitative improvements can help the poorest people on earth. Malaria number one killer of children in Africa. Epidemiological modeling. Allows us to better target intervention dollars. Smallpox is only human disease that has been eradicated. Polio down to a few thousand cases a year. That’s the thing he spends most time on as an individual project. Hoping to make it second human disease to become eradicated in matter of years.

Computer modeling of disease. Intellectual Ventures Model, agent-based Monte Carlo model. World effort to get rid of malaria will be driven by modeling. Computer science is key to eradicating disease — simulating what will happen with bednets and vaccines. More than you’d ever thought you’d learn about malaria. Most of the cities in Africa are inland because of the desire to escape malaria.

It makes it so much more rational to make decisions when you’re able to model the effects.

Opportunities that excite me for computer science to have an impact: energy, education, healthcare, population growth, sanitation/water. I think technology is the big promise there. Khan Academy. There’s many people doing work like that but it’s really an exemplar of the notion of using online lectures, testing your own knowledge. (Note: Reference to Khan Academy corrected.)

Although my full-time work is foundation work, I find myself coming back to people like you and saying, “Help me, give me some computer science to solve these problems, and I’m optimistic that you’ll deliver.”

UW professor Ed Lazowska. 7 billion population threshold. What are the implications of population growth on problems you describe?

Gates: Past predictions of 20 billion was scary. Smaller families, and today majority of countries around world are below replacement level. The problem we have with population today is that it’s in some locations where we can’t afford the increase. Africa, 800m today. Will be bigger than China or India, 20M in 2040. 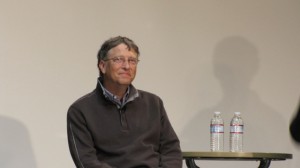 Student question. Personally like to thank you for saving me winter algebra last year through Khan Academy investment. Is there a need for a teacher role anymore?

Gates. If you go from kindergarten to college, certainly the need for adult supervision hopefully goes down somewhat. But remember education to some degree is about motivation. If you’re motivated to learn physics, read Feynman’s book. Education is not about the unique availability of information, it’s about curating info into form that student chooses to ingest. Always will be teacher, but most replaceable in terms of lecture. We have about 20 schools now that have agreed to design entire experience around Khan lectures. [Note: Reference to Richard Feynman corrected.]

Acid test for education is in inner city schools, environment and motivation is weakest. Half of test schools in that area.

Gates. Hmm. I think computer is a great tool, but if by computer science we mean understanding queueing theory and hashing and database indexes, not sure. But knowing how to write a program, prime numbers by algorithm is a very interesting test of whether you know prime numbers. What’s really necessary? Geometry? No, probably not. But certainly a level of complex thinking that’s valuable to be exposed to. Statistics very important. Where computer scientist falls in hierarchy, I don’t know.

Gates: People with computer science background know how to break things down and think about them. The basic notion of what’s an algorithm. Many systems in society are basically poorly designed algorithms. Important to understand.

Student question. Growing disparity in wealth and income. Money concentrated in hands of just a couple people. You among them. You’re doing pretty good. (Laughter.) But money influencing politics. Citizens United court case. Who has money influences information getting out. What should we be focusing on as a nation? 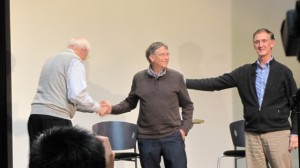 Gates: The world at large is less inequitable today than at any time in history. Number of people in abject poverty, as a percentage, is at all-time low. Innovation means it will continue to go down. I do think in most problems time is on our side. Absolutely right there are some big fortunes and it’s not good to have a society where you don’t have mobility between different income levels. Education ought to be good enough to move between them. Maybe self-serving, but I wouldn’t say it’s because a few people are very rich, I’d say it’s because we aren’t doing a good enough job on education.

Warren Buffett and I are two wealthiest Americans. Believe rich should give away wealth more than they do. Warren is only person to have a tax named after him. You can be very frustrated with the political system, I certainly am. Met with House members to talk about science cuts. Don’t think getting rid of wealth will solve problems. Need to fix education system, get cost of health care down, and society will feel more equitable.

Lazowska: Politics and role of web?

Gates: People do wonder if this polarization does come from the Fox News phenomenon, listening to people we agree with. Web does allow us to dig into topics. The U.S. tax code is so complex that you don’t know where to be outraged. Volcker rule. 400 pages. I’m going to read it. Health care reform bill is 2300 pages. I’m not going to read it. Complexity, fact that we can’t talk directly about issues, means we talk about personalities. Internet offers chance to dive deeper. I tend to still be optimistic.

Gates: I know a lot more about malaria and hash tables. I like hash tables and I dislike malaria. But health care reform is important because cost trends are such that we’re going to be denying people care. That’s horrific. Governor’s budget proposal will cut funding to UW. There’s many steps in the causation, but rising medical costs is a core piece of what’s going on. You have to take innovation and make it your friend, to result in lower cost in health care.

Student question: Robotics. How will it play out to improve world?

Gates: Robots clean the rug today, and disarm bombs. Term robot is unusual. Tend to apply to something that moves on its own. When it comes to things like doing physical security or transportation, having cheap robots really can improve the world, do fantastic things. One of people he brainstorms with at Nathan Myhrvold’s company thinks robots should be there whenever somebody needs a c-section. When you talk about making things less expensive, the robot can perform a lot of functions.

Gates: I didn’t start out with dream of being super-rich. Even after we started Microsoft he looked at guys running Intel and thought, wow, that must be strange (to be rich). It is, sort of strange. Wealth above a certain level is a responsibility to leave to children, which may or may not be good for them, or figure out how to give it away. I can understand wanting to have millions of dollars, there’s a certain freedom, meaningful freedom, that comes with that. But once you get much beyond that, I have to tell you, it’s the same hamburger. Dick’s has not raised their prices enough. But being ambitious is good. You just have to pick what you enjoy doing.

Gates. Should always measure good and bad. But I haven’t seen any evidence of any significance that socialization has broken down in any bad way. With Skype I meet my daughter’s boyfriend’s parents when I walk in her bedroom. Socialization is changing. When I was young and wanted to know about fertilizer, if World Book didn’t have answer, he was out of luck. Now he and his kids can learn things online together. Some issues generally with privacy, video games, pornography, but overwhelmingly we’ve got lots of positive things.

Student: We’ve had the personal computer then Internet now the smartphone. What’s the future?

Gates: Difference between phone and PC is size of screen and input technique. The next generation is either a screen that you can fold out to any size you want, like a scroll, or more likely it’s simply projecting on to your retina. If I have a projection ability. Eventually going to laugh at weird contraptions called screens. All you’ve got to do is put something on your eye.