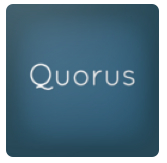 A few weeks ago, we reported that Quorus co-founder Logan Bowers had left the upstart to become a senior software engineer at Amazon.com. Well, as it turns out, the former Zillow and Expedia developer will have some familiar faces hanging around the Amazon offices.

GeekWire has learned that Amazon not only hired Bowers, but gobbled up other members of the Quorus team in what appears to be a “talent acquisition.”

In addition to Bowers, Quorus co-founder Michael Dougherty, as well as employees Sam Rayachoti and Peter Abramson, have joined Amazon.

Reached via email, Dougherty declined to discuss details of the new gig or whether the social shopping technology that they created at Quorus was part of the deal.

All signs appear to point to a talent acquisition, with the Quorus Web site now directing to a placeholder site.

We’ve reached out to Amazon to get more details on what the Quorus team will be building at the online retailer, and we’ll update the post as we learn more.

Originally known as Fridge Door, Quorus developed social shopping and marketing technologies used by retailers and brands. The technologies were designed to enable better conversations between merchants, customers and customers’ friends. Interestingly, in a story last year on Social Times, Dougherty explained how the technology was being used by customers at Zappos (an Amazon property) to share deals and opinions about selected products.

The Quorus page on LinkedIn described the company’s Engage product as a “post-click marketing platform” that allowed retailers to “message their visitors with unique calls-to-action which personalize the site experience.”

Those could be interesting technologies or ideas to incorporate into Amazon. Or, perhaps, the team is working on an entirely new effort.

Dougherty — who studied electrical engineering at the University of Washington — previously worked at both Zillow and Redfin, the latter of which he co-founded.