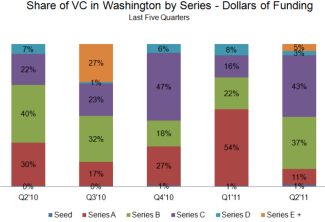 Guest Commentary: After reading GeekWire’s post about how Washington state is lagging California, New York and Massachusetts in venture capital deals, some data points struck a chord with something I’ve been observing for several years: Seattle’s early-stage investment community is very weak.

I looked at the same data in the CB Insights report, looking for something very specific. What is the number of seed deals in each of those states? Over the last five quarters, California had 155 seed deals from venture capitalists. New York had 56. Massachusetts had 32. And Washington had… 13!

The report doesn’t tell the full story because it focuses only on venture capital deals, excluding angel-funded deals like the startup I work at. The Alliance of Angels funds at least one or two startups per month, and the other angel networks in Seattle also are pretty active.

But California, New York and Massachusetts also have their own angel groups, funding deals in their states. So, yes, it appears that we are at the bottom at least compared to the major innovation centers in the U.S.

About three years ago I met with a respected venture capitalist in the Seattle area who told me that, for the first time, they were actively looking for deals outside of the region. The reason?

He said there just weren’t enough companies with a potential of a $100 million exit or more, so they needed to find those deals somewhere else. Shortly after that conversation, two other venture capitalists from two different firms said something similar to me.

Basically, if you sum it up, they believe there aren’t enough VC-style deals in Seattle.

We are now seeing the consequences of those conversations, with top funds like Ignition, Madrona, Maveron, OVP and others investing in startup companies all over the country. They have to.

Otherwise, they won’t get the best outcome for their limited-partners. With that comes higher costs of investment. (More travel for due diligence and board meetings, more time having to seek new deals, etc.)

If you have not made the connection yet, let me be explicit: Seattle VCs are suffering the consequences of a self-inflicted wound.

They have been “gun shy” on seed-stage deals, which clearly comes with its own perils (hours per dollar per deal, “spray and pray” label, fear of being duped, etc.).

Now, we are going through another cycle. The startup industry here in Seattle is right at the beginning of another self-fulfilling prophecy. We are not doing enough seed-stage deals. And the consequence is that there will not be enough later-stage deals in the next couple of years.

Here’s what I think needs to happen. One or more of the visionary venture capitalists in the region needs to step up to the plate and lead a charge to make 100 seed-stage investments of $100,000 to $500,000 over the next 24 months.

At a cost of $30 million, it will guarantee dozens of series A deals one to three years from now. It will work as an accelerant in our region, creating more opportunities, driving more returns and recycling more capital back into startups.

Marcelo Calbucci is the co-founder and CTO at EveryMove.org, a startup giving consumers new powers to benefit from their healthy lifestyle choices. He’s also the founder of Seattle 2.0.