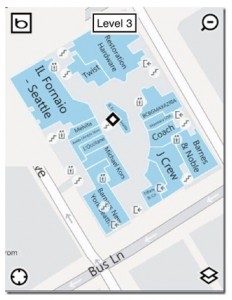 A new mobile browsing option from Bing is going to make it a bit easier to find your way to Crate & Barrel at Bellevue Square or Starbucks at University Village. Bing said it has expanded mall maps to m.bing.com, making it “easier to get where you’re going and find what you need on the go.”

Bing announced mall maps for the Web last December — just in time for the holiday shopping season. The company’s directory of mall maps has now grown to more than 400, according to a blog post from the company.

“Venue maps are a great way to save time and frustration when planning your next summer vacation or that last minute shopping trip – getting you in and out the door faster,” the company writes. “Additionally, we now also provide the capability to search on the map.”

As I’ve noted in the past, Bing isn’t the only one attempting to make it easier to find stores at shopping malls.

Seattle’s Point Inside was an early pioneer in the field, and it just announced that it added 80 more mall maps to its service. We’ve asked Point Inside if they have partnered with Bing on their new offering, and we’ll update this post if we hear more.

Point Inside also has mobile maps for airports, something that Bing also plans to expand into.

[Hat tip to ReadWriteWeb, which notes that “someday indoor maps will probably be ubiquitous.”]