For many years, technology executives would crowd into conference halls to listen to Bill Gates, hoping to glean some insight that might help them in their own businesses. The scene was much the same Tuesday night on the Microsoft campus, but the subject was philanthropy instead.

A relaxed and candid Gates spoke at length about the intersection of technology and philanthropy — talking about best strategies for corporate giving campaigns, sharing his experiences from Microsoft and the Bill & Melinda Gates Foundation, and even acknowledging the irony of the fact that he spends much of his time these days working in cooperation with governments.

The event was organized by the United Way of King County, in an attempt to spur the region’s technology leaders to start or ramp up giving campaigns at their own companies. The conversation was led by Brad Smith, the Microsoft general counsel and co-chair of this year’s United Way campaign.

[Follow-up: Bill Gates: What technology (and baseball) can teach schools]

Continue reading for excerpts from Gates’ comments, and see video highlights below. 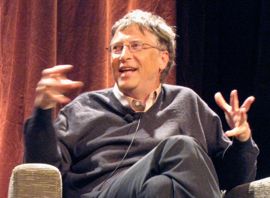 How philanthropy improves companies: It’s smart to get involved. You have many constituencies you work with. You have your employees, and you want them to feel like you’re a company that is making a difference. You want to create a community of your employees that draws in not just the employee, but ideally the spouses, the partners of your employees. And have something that’s more enduring than just whatever your competitive battles are. You’ve got a customer group that’s looking to you … are you a part of the community? In some cases you’ll have a political environment that’s looking at you, deciding how to think about the company. Those things often make it very smart to be involved in these things. … Most of the leading companies that I know have creative ways that they take philanthropy, and drawing their employees in, and it strengthens the company.

The role of “metrics and outcomes” in giving programs: For all the foundation stuff I’m doing now, we are very hard-core about measurement, because when you know you have some things that are incredibly effective on a global level, for example, if you buy additional vaccines, you’re basically saving a life for about $1,000 per life. And you’re avoiding sickness, and you’re reducing population growth. So it’s a pretty phenomenal thing. So whenever I review another program, and I see that they’re being a little bit sloppy about how they’re spending money, I think, OK, they’re being sloppy about $1 million. They just killed 1,000 children, because I could have taken the money and put it over in that other program. It sort of focuses your mind on trying not to waste too many million dollars. 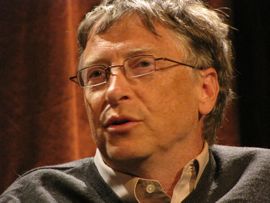 How that compares to the business world: The private sector does have that one great thing. If you’re sloppy about your metrics, you go bankrupt, and the resources that you’re tying up get freed up for someone else to take advantage of in a better way. That clarity is partly why somebody like Warren Buffett prefers to stay in the for-profit world, where the rules are very clear, and delegate the giving to Melinda and I, which is nice, it’s fun for us, because we’ve gotten to enjoy it. But he’s just decided that it’s kinda soft enough that he wouldn’t know whether he’s doing something. His view is, OK, the easy problems have been solved. The hard problems are the ones that remain. Whereas in business, his view is that, because various companies and stocks get mispriced from time to time, he’s handed pretty easy decisions to make. You’re not going to run into too many of those in philanthropy, but there are some. There are some social services locally, some things like vaccines that just cry out. But the metrics can be used.

On the untapped opportunities in philanthropy: I knew in my 30s that I had to figure out where the money would go. I didn’t have kids and I wasn’t married, but the general philosophy of giving it to (his own) kids just didn’t seem to be appropriate. I started reading books about foundations, and I thought, maybe I’ll just fund scientific research. I didn’t know much about Africa, or disease, and certainly didn’t know much about public education. But I started down that path. … I was afraid when I got into philanthropy that all the good ideas would be taken. It would be good if they were all taken. Somebody should have funded a malaria vaccine. Did they just save it for me to come along so that I could have fun being the primary funder of malaria vaccines? It doesn’t make sense that they were holding that open for me to show up. 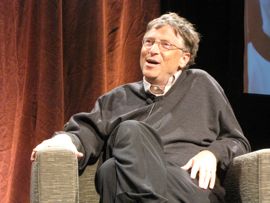 On the similarities between his work in technology and philanthropy: It’s very similar, there’s some great innovators, you have to have patience about things, a numerical way of looking at it. I am involved in working with governments more, which sounds a little strange, since part of my Microsoft career involved a certain kind of relationship with governments. (Laughter) You might ask, why would you move to something that has even more of that? It is challenging with all these budget cuts going on. … Even just taking the foreign aid piece, defending that is hard, even though those dollars are very effective. But in a way you could say it just makes it a more complex game, that you have to understand those things. Governments aren’t that analytical … so the partnership between what the foundation is good at and what the government is good at is often extremely complementary.

How companies should get started: I always believe that when people first get involved in philanthropy, doing something that’s related to social services, something that’s local — almost certainly something that’s an agency that will have a strong relationship with the United Way … that’s really a great place to start, because you can actually see it. You’ve got to get a sense for why there is this need, and what can volunteers help out with.

Where companies should focus: Every company has something that they’re good at, and so when you think of your portfolio of how you’re improving the world, besides your products, besides whatever financial donations you’re involved in, it’s ideal if you can pick something that’s related to the skills of the company. So for a drug company, it’s obvious — invent medicines for the poorest, make sure that whatever you invent is available at very low prices for the poorest. For somebody like Microsoft it’s pretty clear — getting software out to schools that’s very inexpensive, helping non-profits, taking the understanding of digital tools and bringing those to organizations and doing things well. Most companies, if they think about their skill set — not necessarily their particular products, although that’s even better if it works that way — they can say, let’s get our people out there, spreading the word, building relationships, and making sure that these things get used. If you’re smart about it, you’re not taking your product into places you would have made a lot of money otherwise, but you’re increasing the utility.