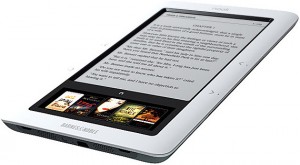 [Updated with Microsoft’s statement.] Barnes & Noble is rejecting Microsoft’s claims that the use of Android by its Nook e-reader violates the Redmond company’s patents — and alleging that Microsoft is going out of its way to put up financial roadblocks for Google’s mobile OS.

Mary Jo Foley of ZDNet.com has details on the book giant’s response to Microsoft’s complaint, including Barnes & Noble’s allegations that Microsoft and Nokia are in cahoots on patents in a way that may violate antitrust laws. Here’s the B&N filing via Groklaw: PDF, 50 pages.

Insisting that an NDA was necessary, Microsoft discussed the alleged infringement on a high level basis only. Microsoft nevertheless maintained that it possessed patents sufficient to dominate and entirely preclude the use of the Android Operating System by the Nook. Microsoft demanded an exorbitant royalty (on a per device basis) for a license to its patent portfolio for the Nook  device and at the end of the meeting Microsoft stated that it would demand an even higher per device royalty for any device that acted “more like a computer” as opposed to an eReader. …

After sending the proposed license agreement, Microsoft confirmed the shockingly high licensing fees Microsoft was demanding, reiterating its exorbitant per device royalty for Nook, and for the first time demanding a royalty for Nook Color which was more than double the per device royalty Microsoft was demanding for Nook. On information and belief, the license fees demanded by Microsoft are higher than what Microsoft charges for a license to its entire operating system designed for mobile devices, Windows Phone 7.