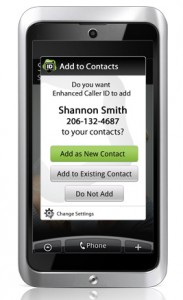 Cequint, the maker of caller ID products for mobile phones, has sued Apple for patent infringement. The Seattle company, which was acquired last year by TNS Network for up to $112 million, alleges in the suit that Apple’s iOS 5.0 mobile operating system violates two patents held by Cequint.

In the suit, Cequint asks a judge for a permanent injunction against Apple from using the technologies. The patents in question are No. 7,200,212 — titled “Decoding and processing system for advanced determination and display of city and state caller information” — and No. 6,353,664 — titled “Caller ID equipment which displays location of caller.”

Bloomberg News first reported on the suit, which was filed this week in federal court in Wilmington, Delaware.

Cequint’s Caller ID technology displays the names and phone numbers of incoming calls, even for those people not in one’s personal address book.