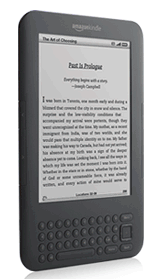 Amazon.com is now selling more Kindle books than printed hardcovers and paperbacks, a milestone that comes four years after the company introduced its electronic reading device. The online retailer has always closely guarded its Kindle numbers, and today’s press release does not indicate how many of the reading devices it has sold to date. But the latest announcement does include a few other interesting factoids about how readers are shifting to digital formats.

–Since April 1, for every 100 print books Amazon.com has sold, it has sold 105 Kindle books. This includes sales of hardcover and paperback books by Amazon where there is no Kindle edition. Free Kindle books are excluded and if included would make the number even higher.

“Customers are now choosing Kindle books more often than print books. We had high hopes that this would happen eventually, but we never imagined it would happen this quickly – we’ve been selling print books for 15 years and Kindle books for less than four years,” said Amazon.com founder Jeff Bezos in a statement.

According to a recent report by the Association of American Publishers, digital titles accounted for $90.3 million in sales during February. That was up 202 percent over February of last year. The report also found that e-books now rank as the number one format among all trade categories, including adult hardcovers and paperbacks.